“You got a bread machine?”

“Then how do you make bread?”

I’ve baked bread as long as I can remember, first with my mother’s guidence and for at least four decades now on my own. Through high school I kept a sourdough starter alive, baking five smal loaves every Sunday as the centrepieces of the next week’s school lunches. Some might argue that I find baking bread to be one of the simplest of kitchen things because of this stupid long experience making the stuff. I would argue, however, that I feel this way because it truly is absolutely dead simple to bake a more than decent loaf of bread with little experience and less effort.

The other day I made a couple of loaves. No kneading. About three minutes of hands on effort. Lots of free time to do other tasks in and out of the house while ostensibly making bread.
Here it is:

Stir in 13 ounces of water

Cover the bowl with plastic wrap and go away for the day or go have a good night’s sleep.

Whenever you get around to it, give it another quick stir.

After an hour or two, divide the lump roughly in half and quickly shape the two bits into elongated lumps on well-floured boards. Cover with plastic wrap. Go away for an hour or two.

Put a couple of heavy cast-iron lidded casseroles or pots or something into the oven and crank it to 450°F. There’s only one in the picture because my sister-in-law had my other one.

A while after the oven and the pots get hot, take the plastic wrap off the loaves, pull the pots out of the oven, take the lids off, sprinkle flour into them, flop the loaves into the pots, put on the lids and shove the lot back into the oven.

After thirty minutes or so, take the lids off and let the bread brown for five minutes. 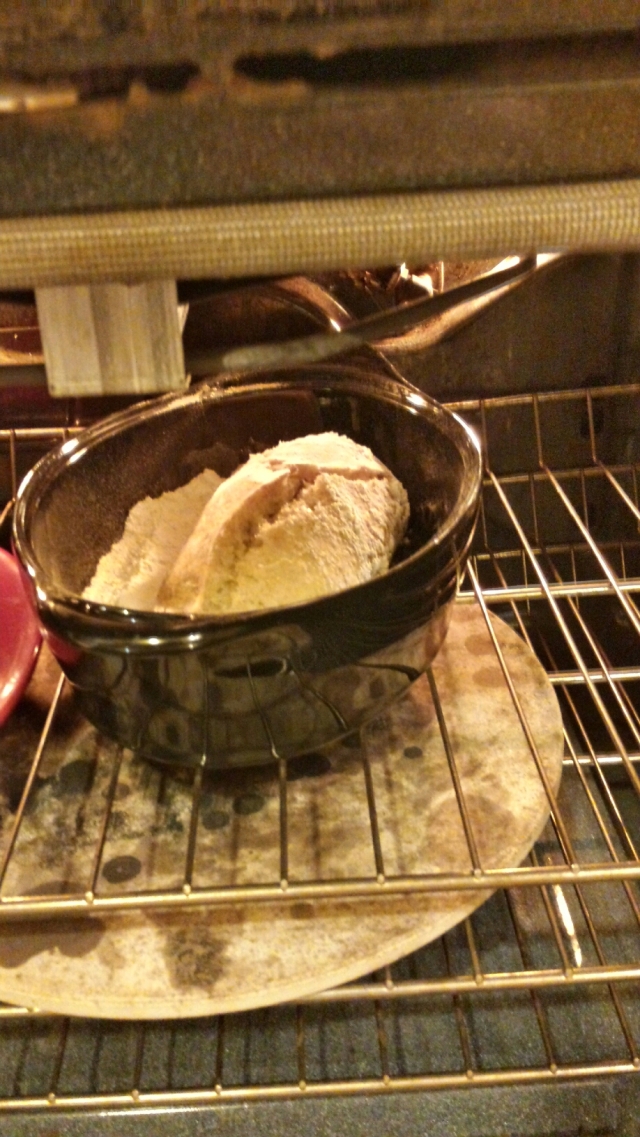 When the five minutes are up, take the pots out of the oven, lift each loaf out of its pot, scrape the flour off their undersides, and put them on a rack to cool, if you can wait to taste your newly baked bread!

That’s it. Bread the easy, old-fashioned, no machine way. I’ve even baked this bread in a fire pit in my back yard (the cooking time was under ten minutes).
To be honest, I don’t know why there’s any sort of market for bread machines.

A fragment discovered during excavations at San Giovanni di Ruoti in 1983.  It seems to be part of a much longer epic, but at this point it is impossible to discern the intended development of the narrative.

. . . the shout was heard from R’oti unto Bella
as then came down the wrath of bold Wendela
for Jackie had climbed up the pot-strewn hill
and talked to Jenny, ‘gainst her leader’s will.
The shout died out and all around no sound
nor sight of one who cared could there be found.
Now with the speed of treacle in the snow
fair Jackie hastened back into her row
and as she wandered pass’d, wise David said
that Romans on the mould of cows were fed.
Up from the trench stood Jeremy the good
expounding that he’d not heard of such food:
“In all the years that I have Latin took
I’ve never found such words in any book.
I don’t know where you find your silly lies.”
He turns and up the eastern hill he hies.
And Mary Ellen strode through all the ranks —
or rather limped — she had herself to thank:
the other night, in battle with a beer
she’d broke a foot, and swore no doctor’d see her.
So on she limps, her metatarsals blue,
and she’ll dig on ’til rock — or bone — shows through.
And all of this came to the Doctor’s sight
as he watched from the Tip-Pile’s foggy height.
He shook his head and twirled his trow’l around,
said, “Well, we’ll see” and turned and stumbled down.

(Dedicated to the memory of Bob Buck, who taught me Latin, and to Alastair Small, who arranged that trip to Cumae, and who together somehow wrangled us all that summer.)

I’ve just had a truly remarkable day of theatre experience, all of it in the old brick firehall now known as the Walterdale Playhouse. I’ve long had a warm place in my heart for the Walterdale and its people. For Walterdale people, the Ideal of Theatre is Love, and they purify their Theatre with sacrifice.

My day began with an intense Cradle to Stage workshopping session with Brian Dooley (Director of New Play Development at the Citadel Theatre), Vlady Penchoff (Cradle to Stage Festival Coordinator), Payam Saeedi (Associate Dramaturge), Eric Smith (Director), and nine members of the Citadel Theatre’s Young Acting Company. These thirteen people spent the daylight hours of an Edmonton December Saturday voluntarily taking a dry script written by yours truly from words-on-a-page to passionate performance — twice. No one was being paid. There wasn’t even free coffee. And no one except the fourteen of us witnessed the event. Everyone was there from a pure love of Theatre.

Those young actors sacrificed more than just their Saturdays. They weren’t there to just walk through the piece. They passionately engaged with the text. They dug down into their young selves and somehow pulled out flashes of powerful — unbearably powerful — feelings of humans twice their age. They patiently worked through my ridiculously long and convoluted sentences and found the coherence. They even happily recited some Old English verse after a tiny bit of coaching.

It was a wonder and an honour to behold!

Edmonton is a wonderful theatre city. I’ve said it before: over the course of each year there are literally thousands of individul theatrical performances within a half hour walk of my front door — most of them within a lazy ten minute stroll.  But the Walterdale is its own kind of special. The Walterdale functions completely on the Love of Theatre, on the belief that Theatre is human nature, and on a mad certainty that if people act as if they are the glowing heart of Theatre, they will damn well be the glowing heart of Theatre. The people who muck about in Old Strathcona’s Number One Firehall (AKA The Walterdale Playhouse) have an Ideal and a Love of Theatre. And they make it pure through their individual sacrifices of time and effort.

The evening of my Walterdale day was a delightful two hours with Oscar Wilde’s Lady Windermere’s Fan. I’ll not go too deeply into the production or the play as Jenna Marynowski has already offered one of her always sensitive and insightful reviews at After the House Lights. Just a few observations.

It was a full house and the house was in stitches throughout.  The costumes were sumptuous, the set was lovely and far more elaborate than expected by minimalist me, and the performances ranged from good to remarkable. The crowd on the stage nailed it and the crowd in the seats loved it.

If I were forced to name a stand out performance, I might choose Marsha Amanova as the absolutely self-sacrificing Mrs. Erlynne.  But I just as likely would select Emanuelle Dubbeldam for her brief, understated, almost totally body-language turn as Lady Windermere’s maid Rosalie. David Owen’s Lord Augustus is wonderfully bug-eyed-stunned, and Patrick Maloney’s Lord Windermere is perfectly achingly conflicted. And Hannah Haugen as Lady Agatha out does Vin Diesel as Groot in Guardians of the Galaxy: her repeated “Yes, Mamma”is an “I am Groot” that is actually easily comprehensible to the entire audience in all its varied meanings.

But the centre of the piece is Miranda Broumas’ Lady Windermere.  At first I thought “she’s stiff. she’s thin.” like a stick is stiff and like water or American beer is thin.  But quickly I realized that Lady Windermere is very young in a very formal society, that she is not yet fully formed, but trying to be strong. She’s a young willow trying to be a stout oak.  Broumas has brought something to the role a more seasoned actor (this is her first Walterdale performance) might have moved beyond and abandoned. This Lady Windermere has, through her theatrical Ideal of Love and Sacrifice, created a truthful performance, to the great benefit of that full house of which I was honoured to be a part.

Lady Windermere’s Fan plays at the Walterdale until December 17, 2016.

Go see it. It’s a hoot.
P.S. Ever notice the influence of Othello on Lady Windermere’s Fan? Think about it. And Othello‘s in Stoppard’s The Real Thing, too.

Seen and Heard in Edmonton

Thoughtscapes - people, place, policy, potential. ....... Think like the mountain, encompass the landscape and its culture, see beyond what we have only come to see

thoughts of an urban Métis scholar (and sometimes a Mouthy Michif, PhD)

Musing on My City

Art inspired by the Earth, the Sky and Beyond.

Reading the classics, CanLit, and everything else. In bed.

Blitzing Through the Bard

Reading the Complete Works of Shakespeare in a Year

What it's like doing a PhD with disability or chronic illness